Finding classical music can be difficult, this page provides you resources and techniques to help you find both known, and unknown works.

It can be difficult to search for themes, styles, or by subject, see the techniques to the right: 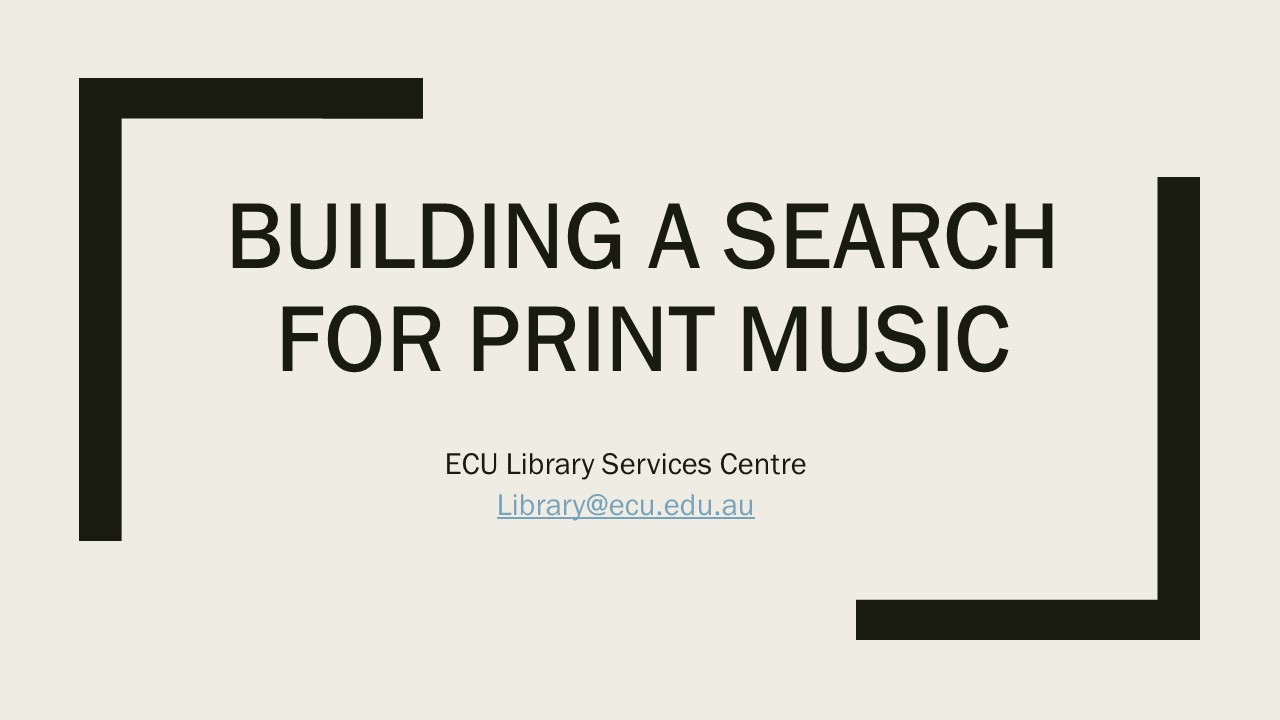 Building a Search for Print Music 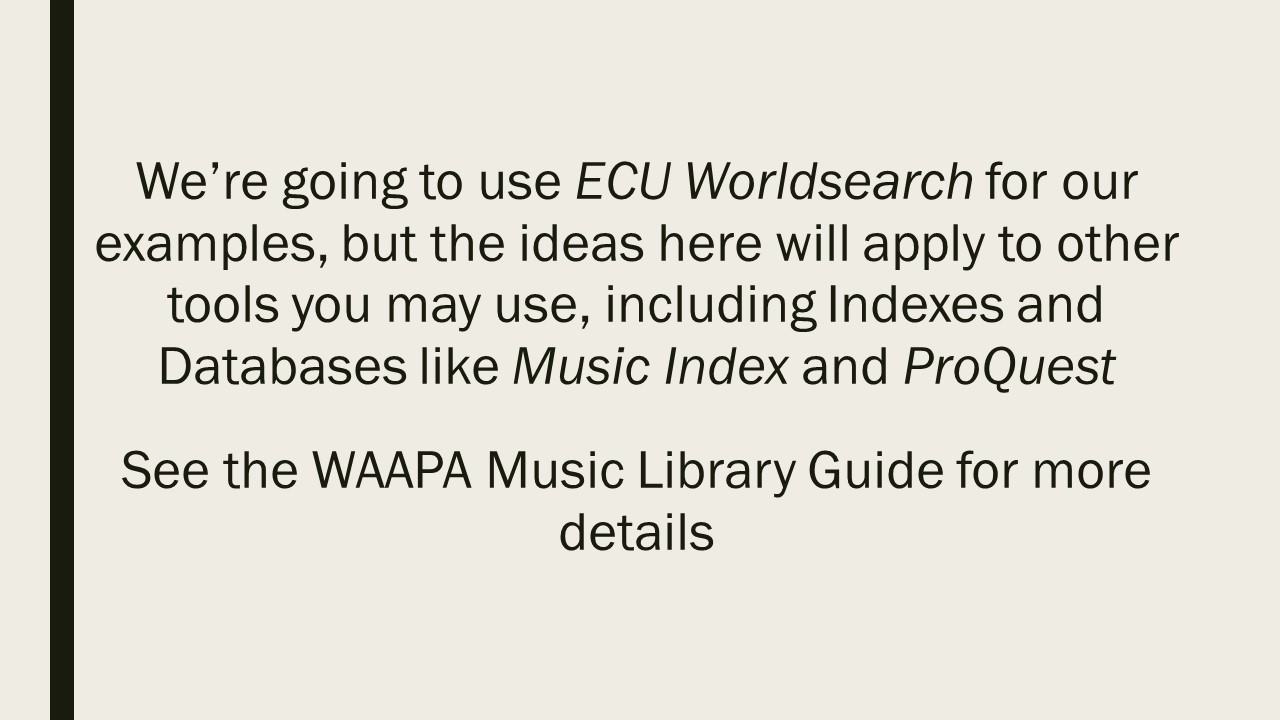 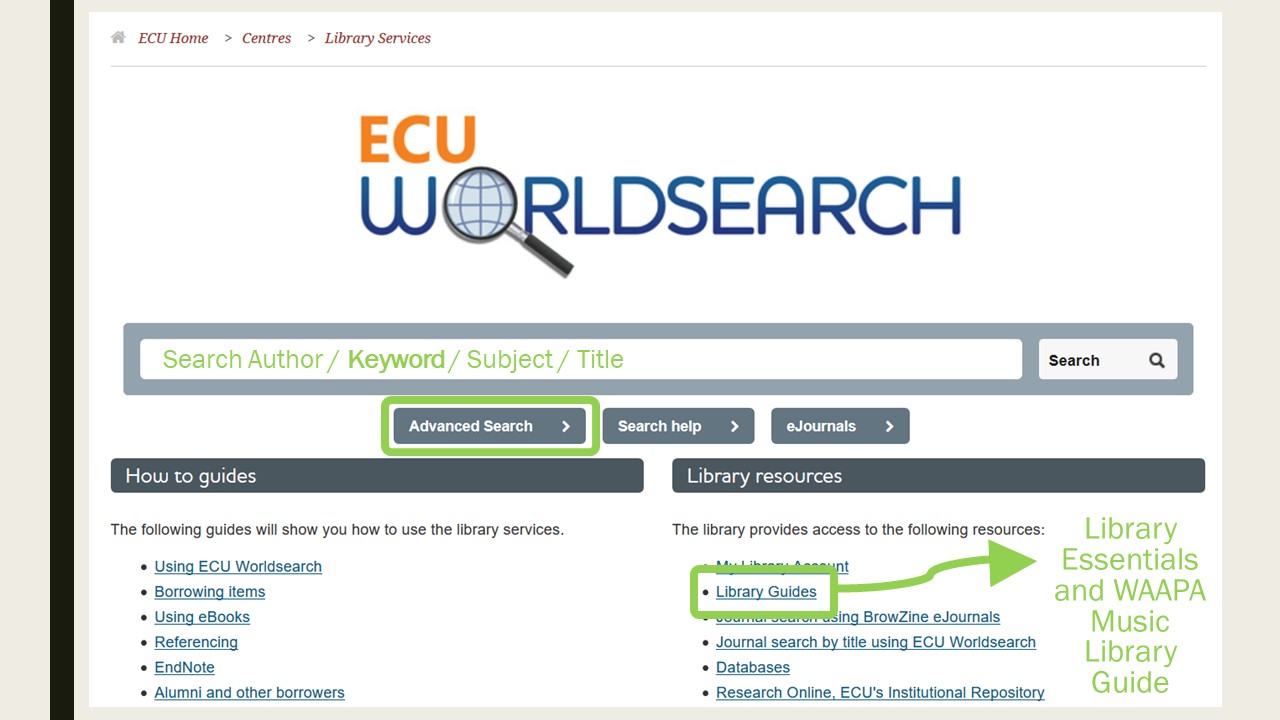 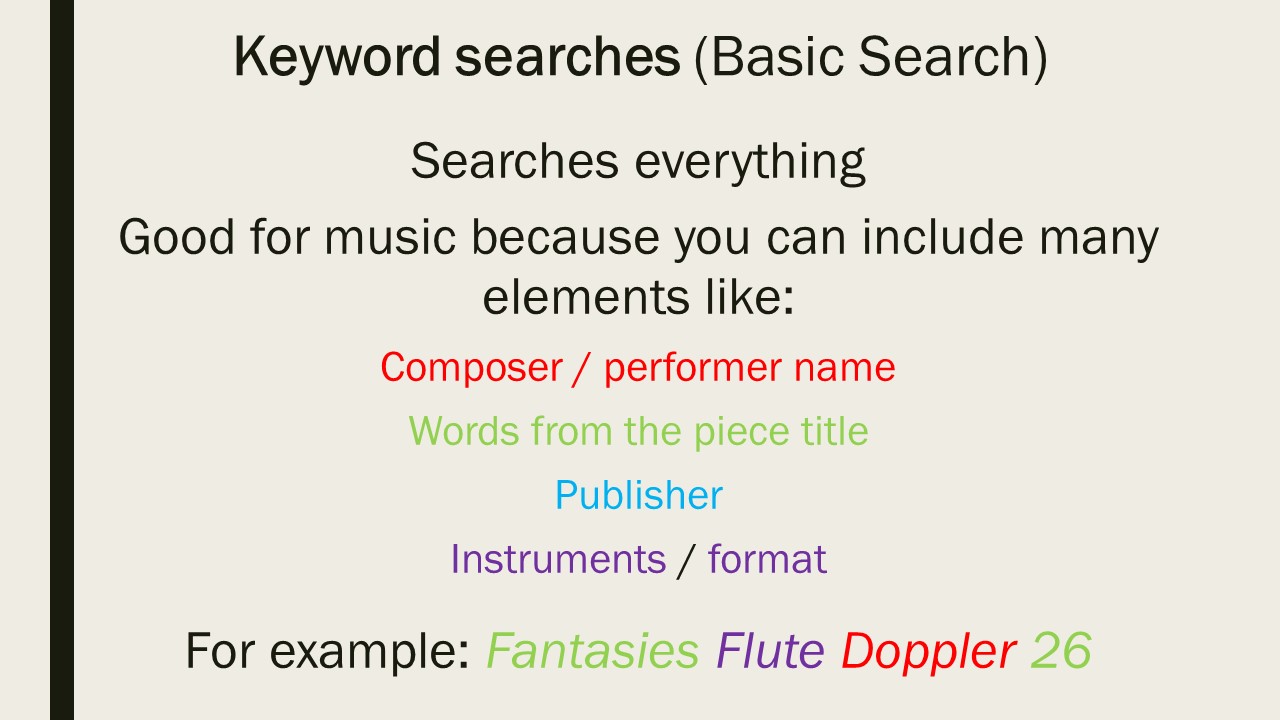 To search any field in a record 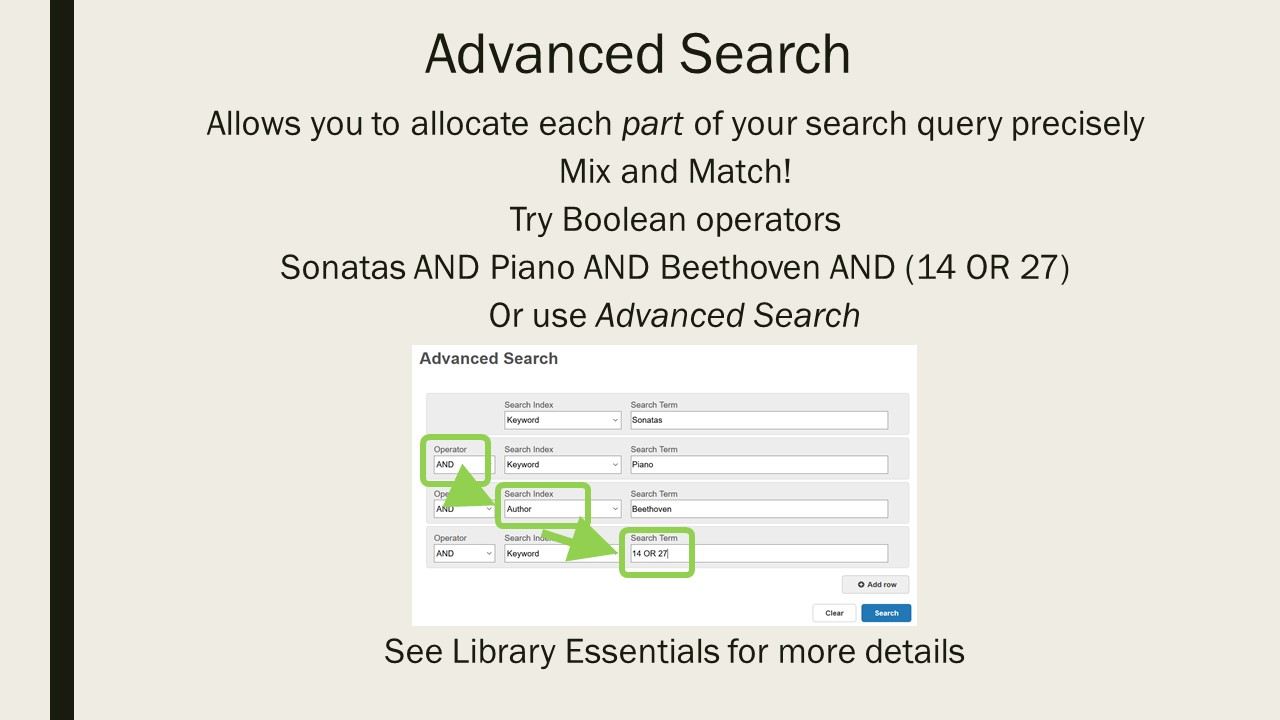 Searching individual Fields such as "Author / Composer" and "Title" 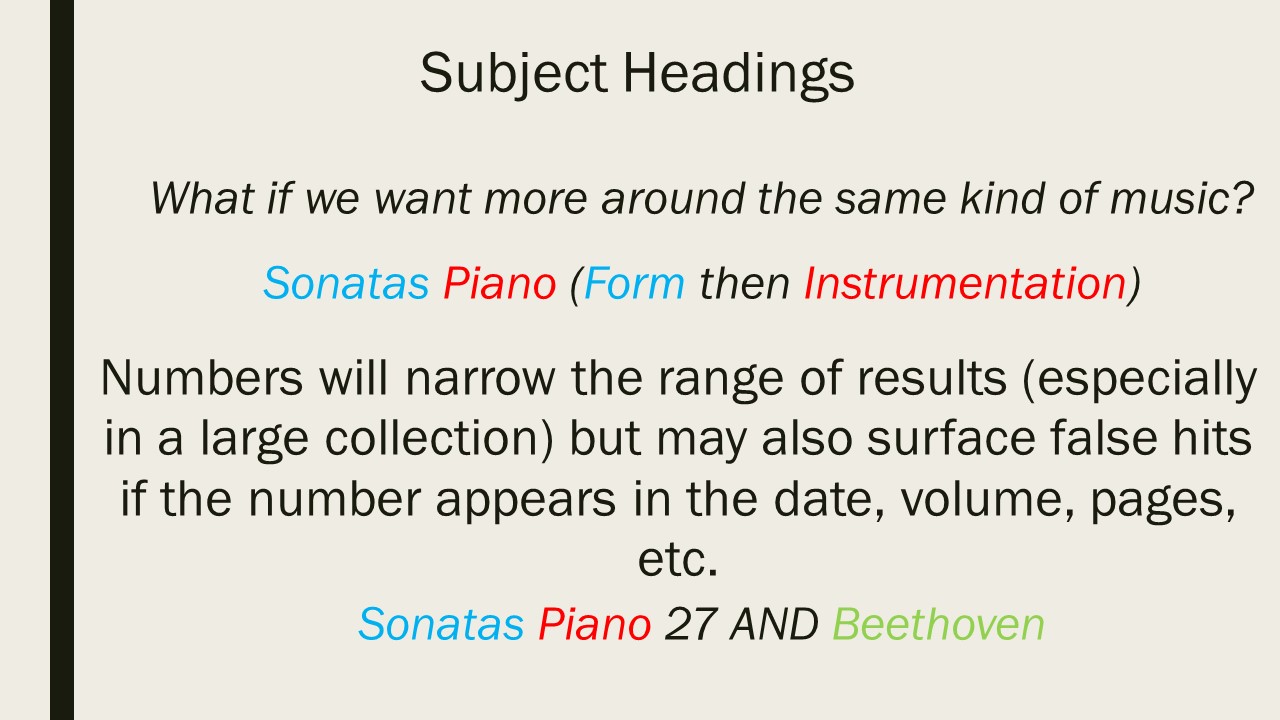 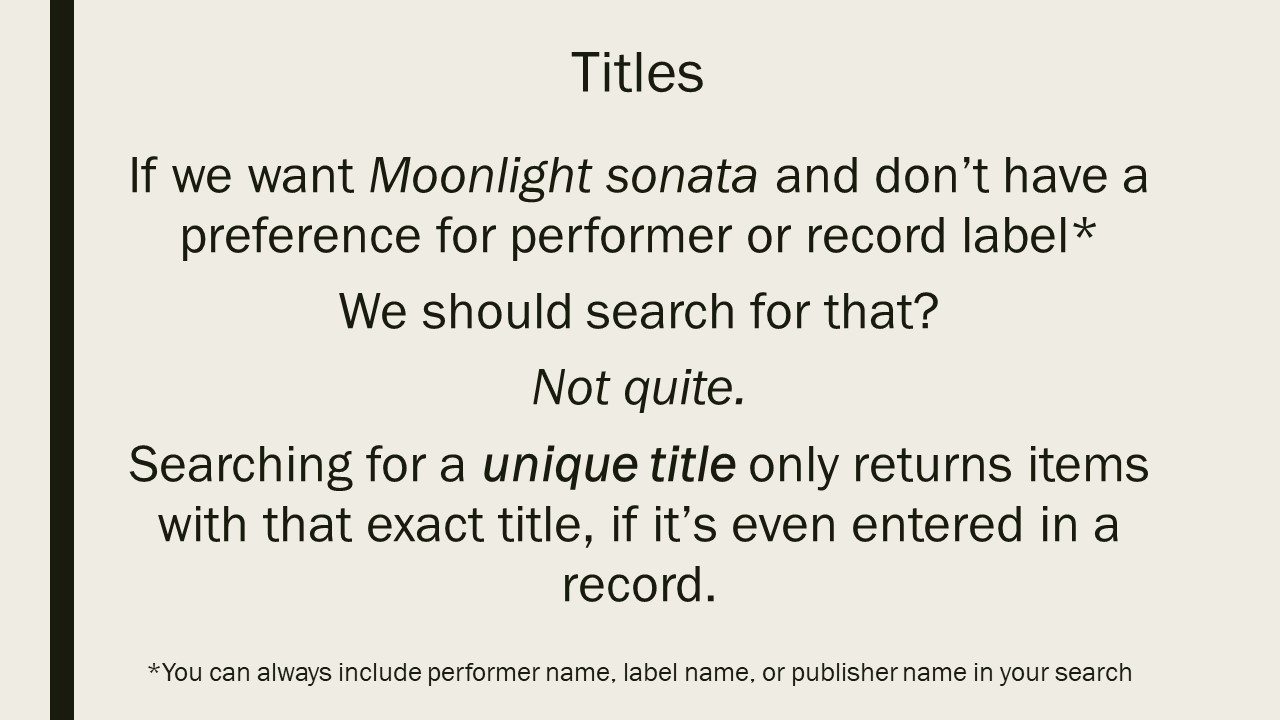 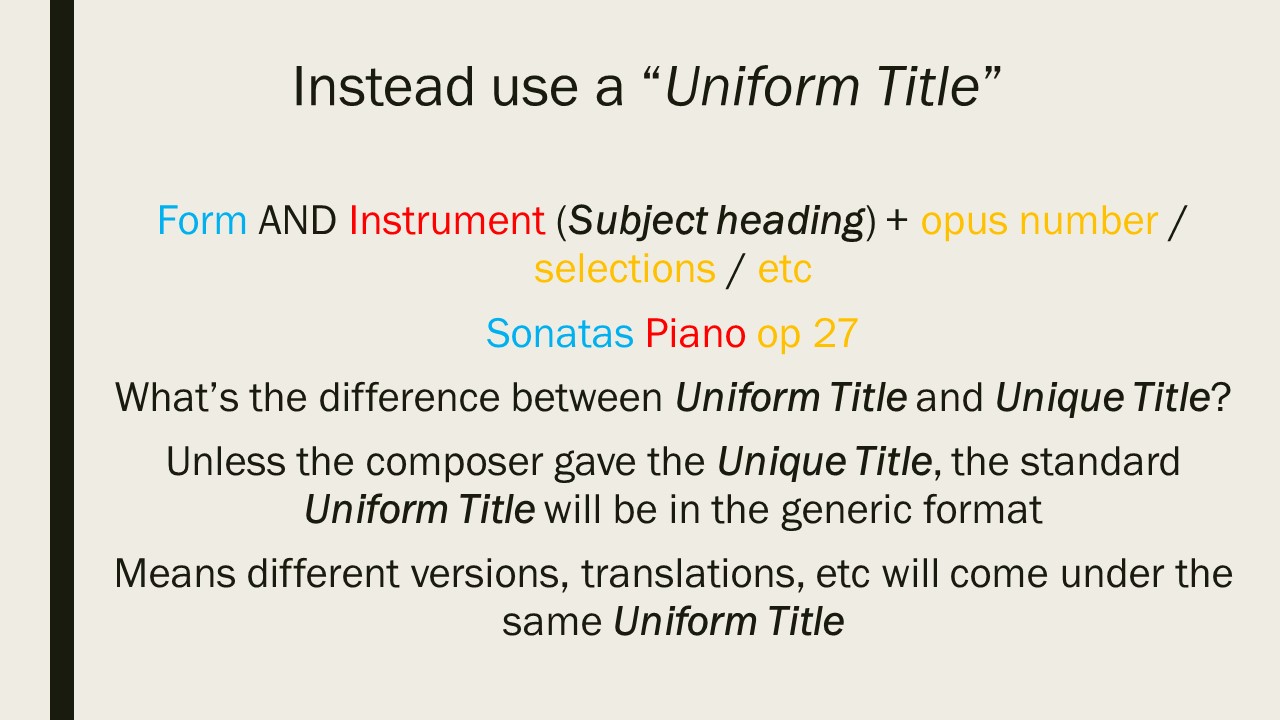 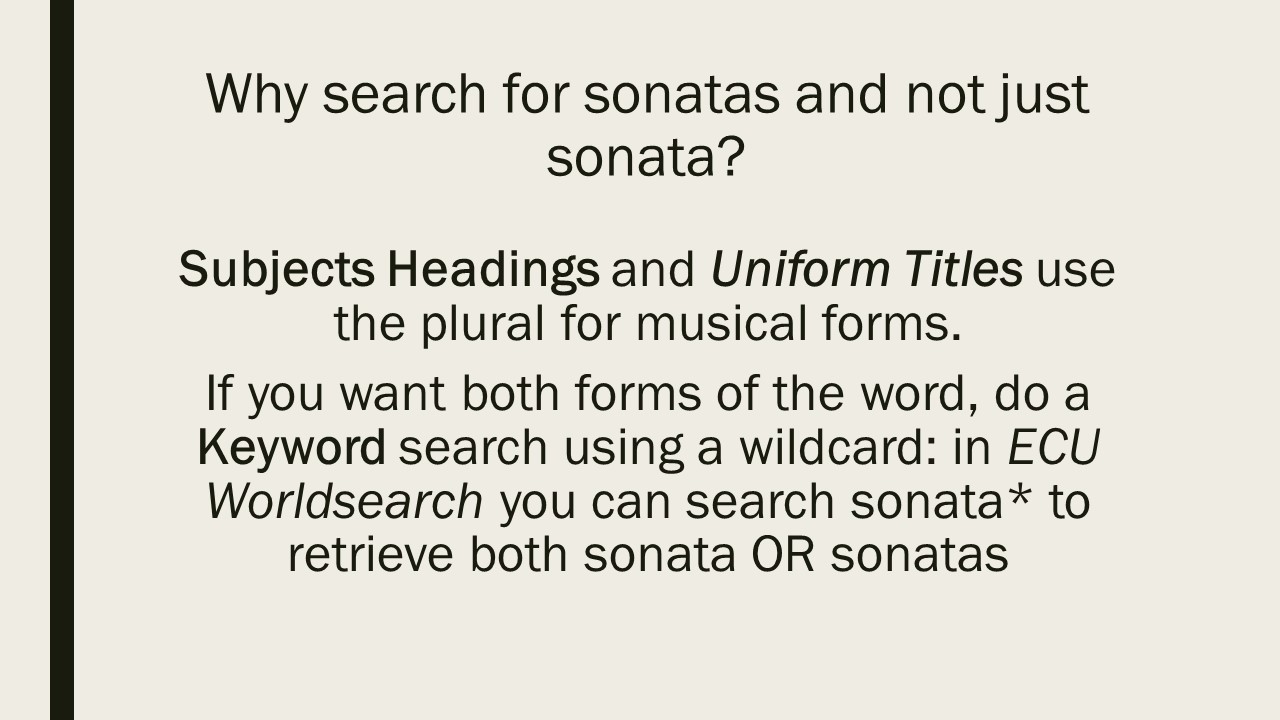 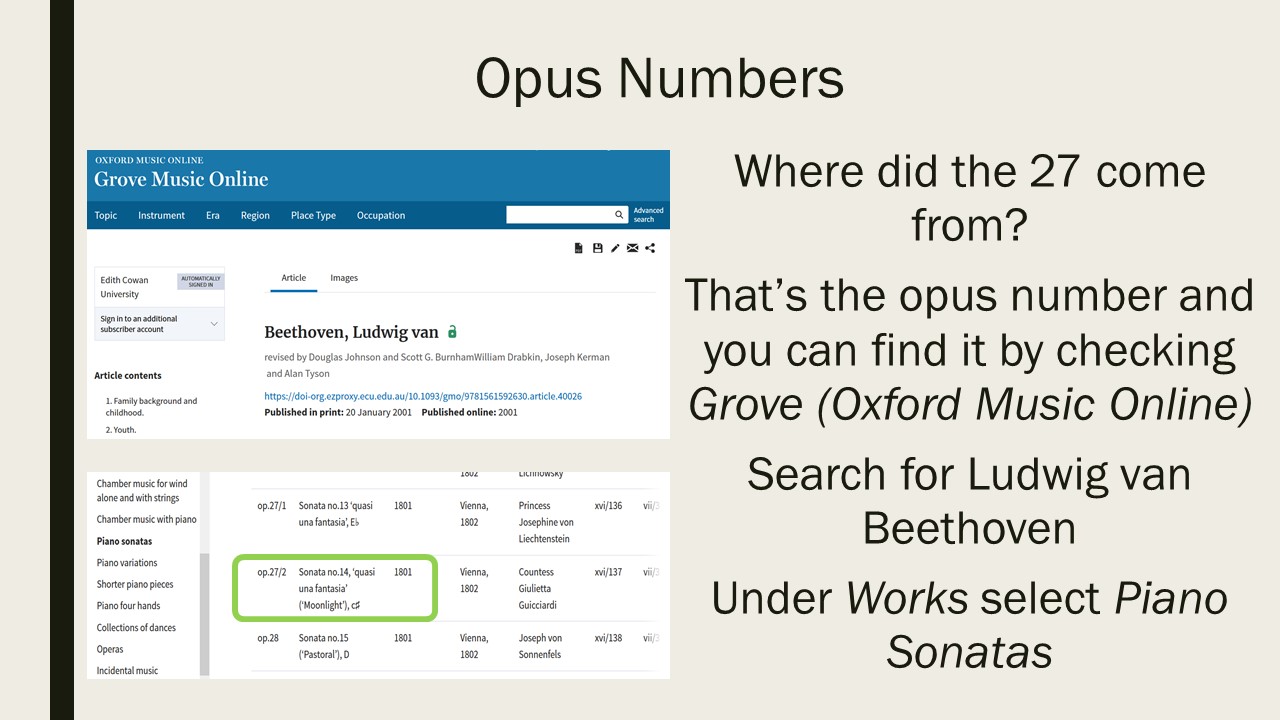 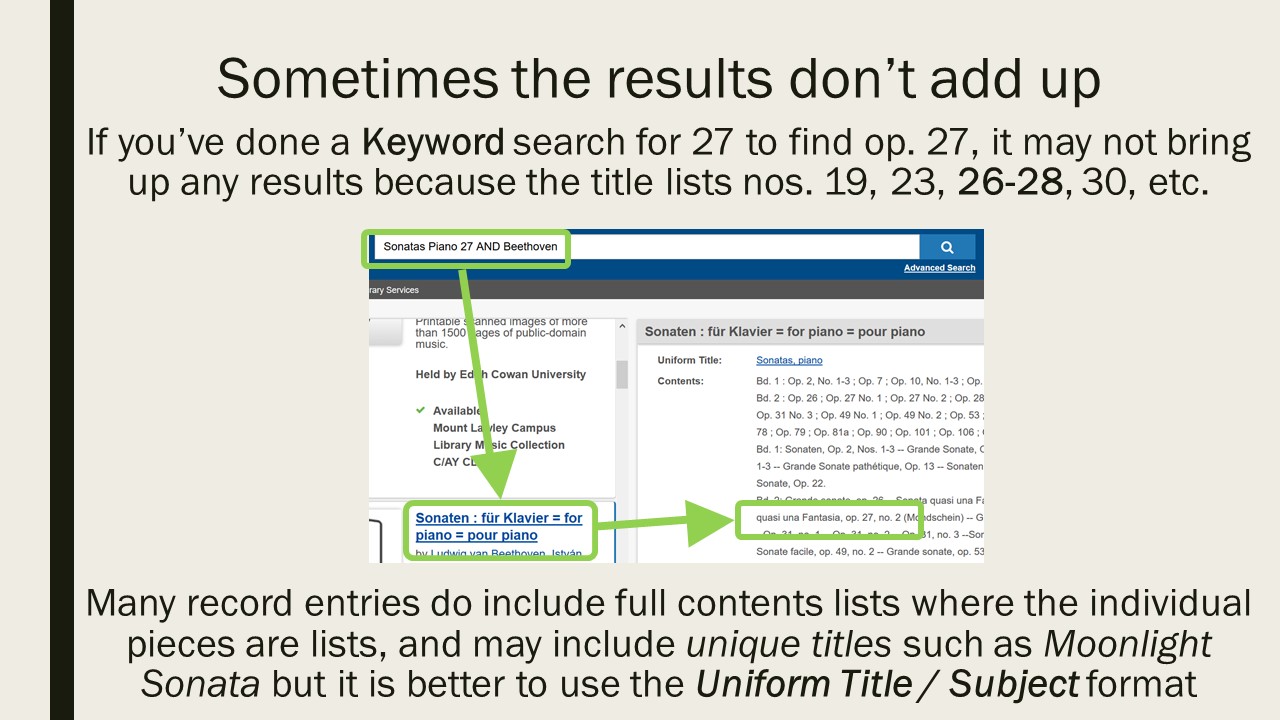 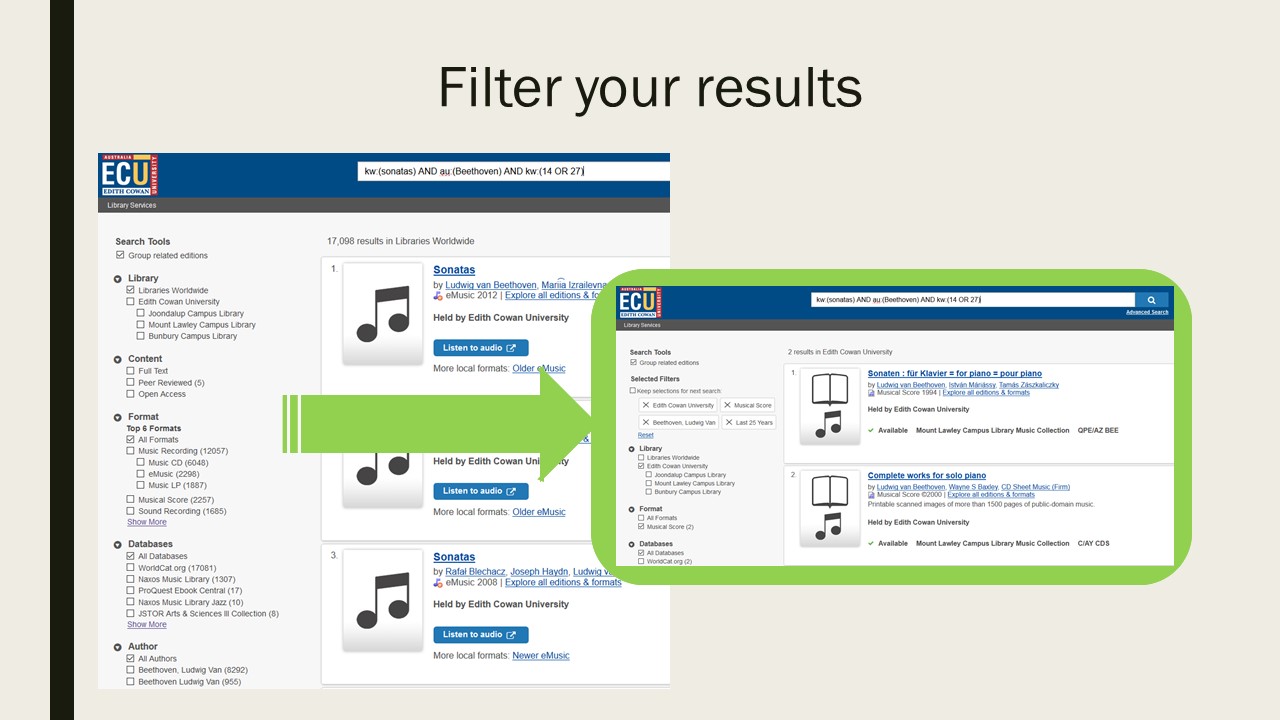 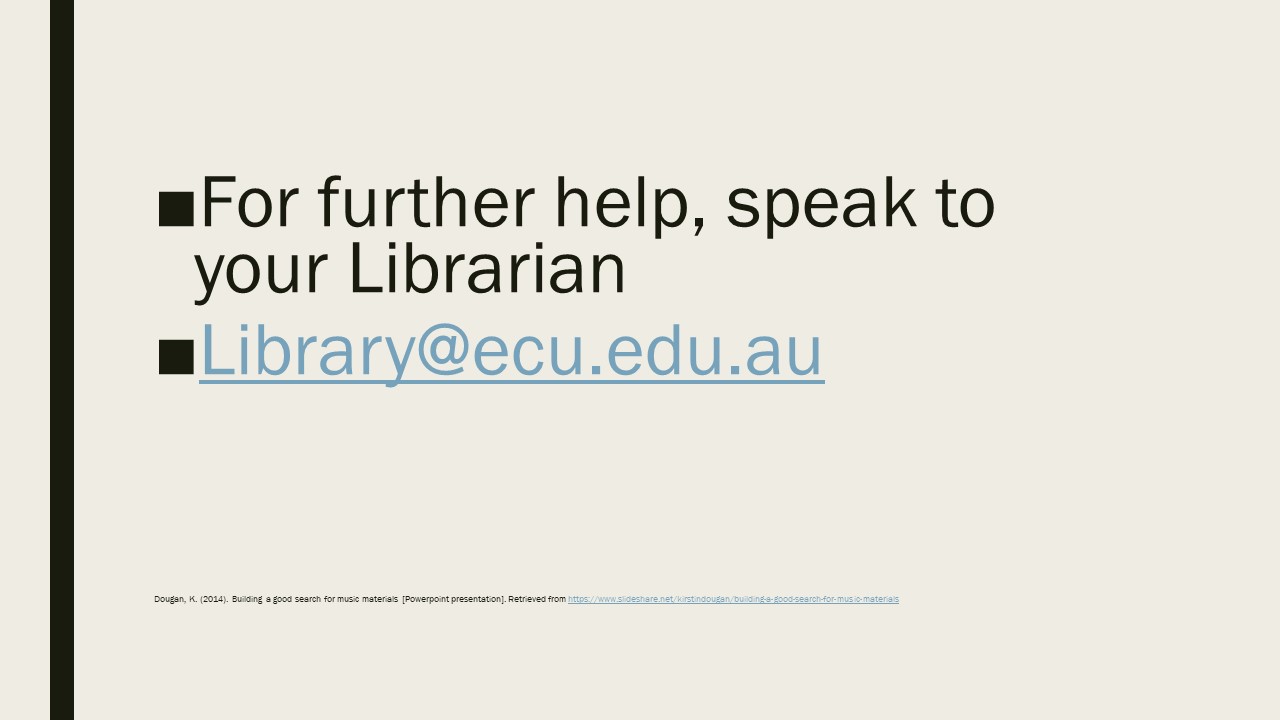 An opus number is a unique number assigned by a composer or by publishers to some or all of that composer's work or group of works.

According to New Grove, opus number were, until 1800, more common in instrumental music than in vocal music and stage works. In the seventeenth and eighteenth centuries, opus numbers frequently were assigned by the publisher at the time of publication. It was not uncommon for different publishers to issue the same work under different opus numbers or to assign the same opus number to different works by the same composer. Considering all this, it is not safe to assume that opus numbering represents chronological order.

“WoO" is used when most, but not all, of a composer's works have opus numbers. The works that cannot be identified numerically are arranged chronologically or by form or genre and assigned numbers preceded by "WoO." This stands for Werke ohne Opuszahl, or "works without opus numbers." WoO numbers for a composer's works are used in authorized access points for music when they appear in a thematic index, in reference sources, or on published works.

Serial numbers are usually assigned by the composer to a group of work of the same type of composition or in the same form in the order in which the works were written. Serial numbers that have been assigned posthumously are generally not used in authorized access points for music.

Work numbers (or thematic index numbers) are assigned by the person who creates a catalog of a composer's works. A "thematic index" or "thematic catalog" may be arranged chronologically, by medium of performance, by type of composition, or by some other criterion.

A Uniform Title brings like-items together in the catalogue and on the shelf. In music, this is especially important as the same musical score or recording can have very different published titles. For example, look at the following titles for the same Bach piece:

How would you find all forms of Beethoven's work when the titles are so different? By use of the Uniform Title. The Uniform Title is included in such works so the user can find all versions of that work. The titles above represent what is printed on either the score or recording which can vary depending on where it is published. Instead, each publication is also matched with the same Uniform Title: 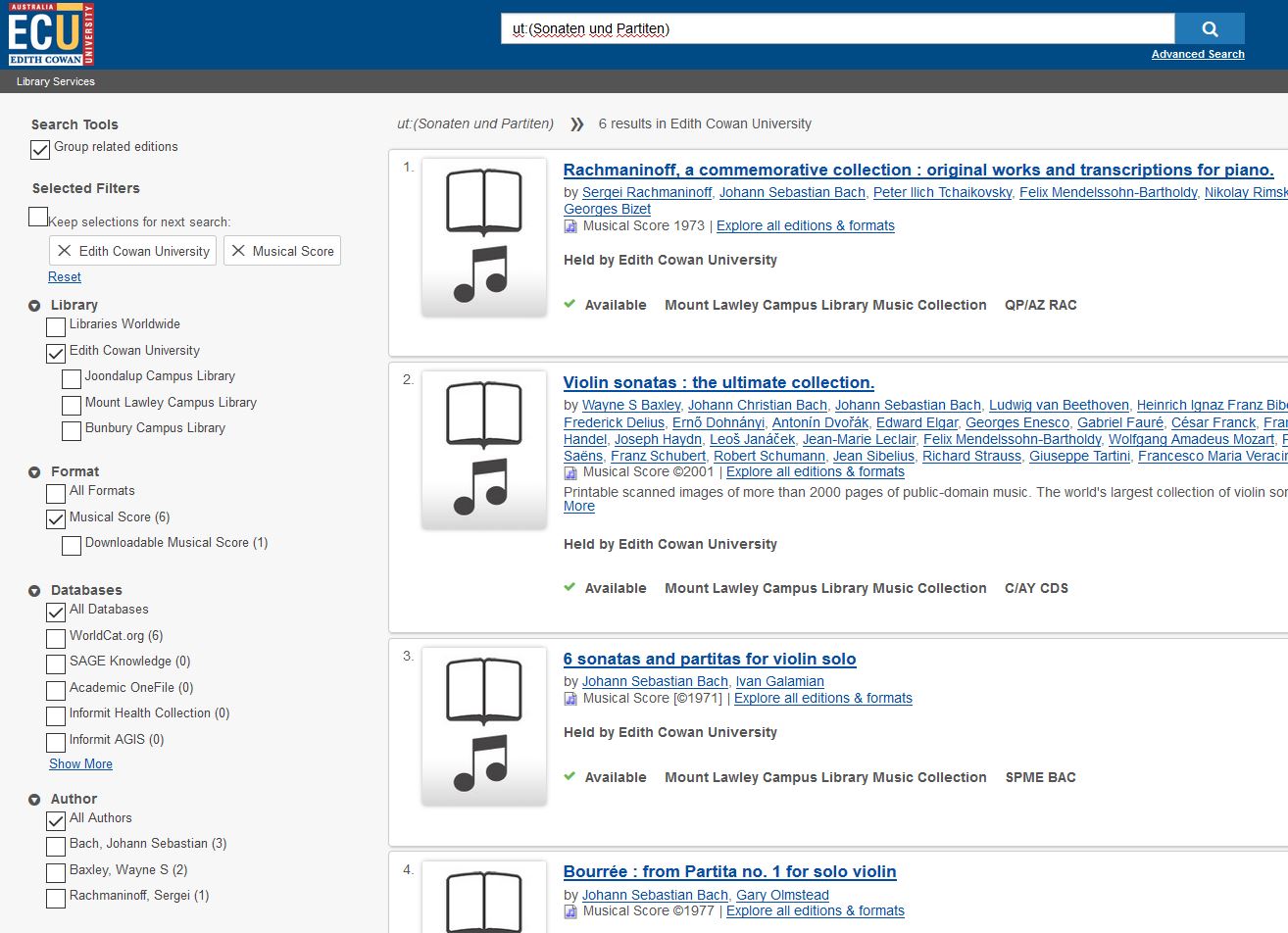 Each individual title has the same Uniform Title which identifies each entry as being the same work. In addition, the Uniform Title in the library catalogue is a clickable link which will bring you to all of the versions of that work that the library owns.

Works with Distinctive Titles
If the work's title is distinctive, the uniform title consists of the original title (from the manuscript or first edition) in the original language.

NOTE: This only applies if the distinctive title was given by the composer themselves, not merely a popularly understood name for the work.

Works with Form or Genre Titles
If the composer's original title is simply a form name or genre (with or without key and number), the title is considered non-distinctive. The first word of the uniform title is the form or genre, and it's always in the plural except when the composer wrote only one sonata, nocturne, etc. The instrumentation, number (ordinal, opus, and or catalogue number) and key are often added to the form name.

For example: Sonatas, flute, A minor (include AND Bach to return Partita in A minor (BWV 1013) for solo flute)

If you remember the order of the elements of a form-type preferred title, you should not go wrong.

Here are a couple of examples:

"Extra Information" can be used for a variety of useful bits of information. For example, any kind of preferred title (form, distinctive, or collective) may have qualifiers added at the end in order to distinguish one kind of edition from another. Five qualifiers are encountered frequently in the catalogue:

A thematic catalogue systematically organizes and lists the entire output of a composer's works (sometimes the works of an institution or school), including information such as the original title, date and place of composition, an incipit (first few bars of the music) for each piece, the provenance of manuscript copies, early published editions, and other details to aid scholarly research.

Note: Look in ECU Worldsearch under Subject: Thematic Catalogues to identify thematic catalogs in our Library.

Established in 1952, RISM is an ongoing inventory of the universe of musical literature created prior to 1800.

Citations include a complete description of the material, and the library/archival location at which these unique resource materials can be found. 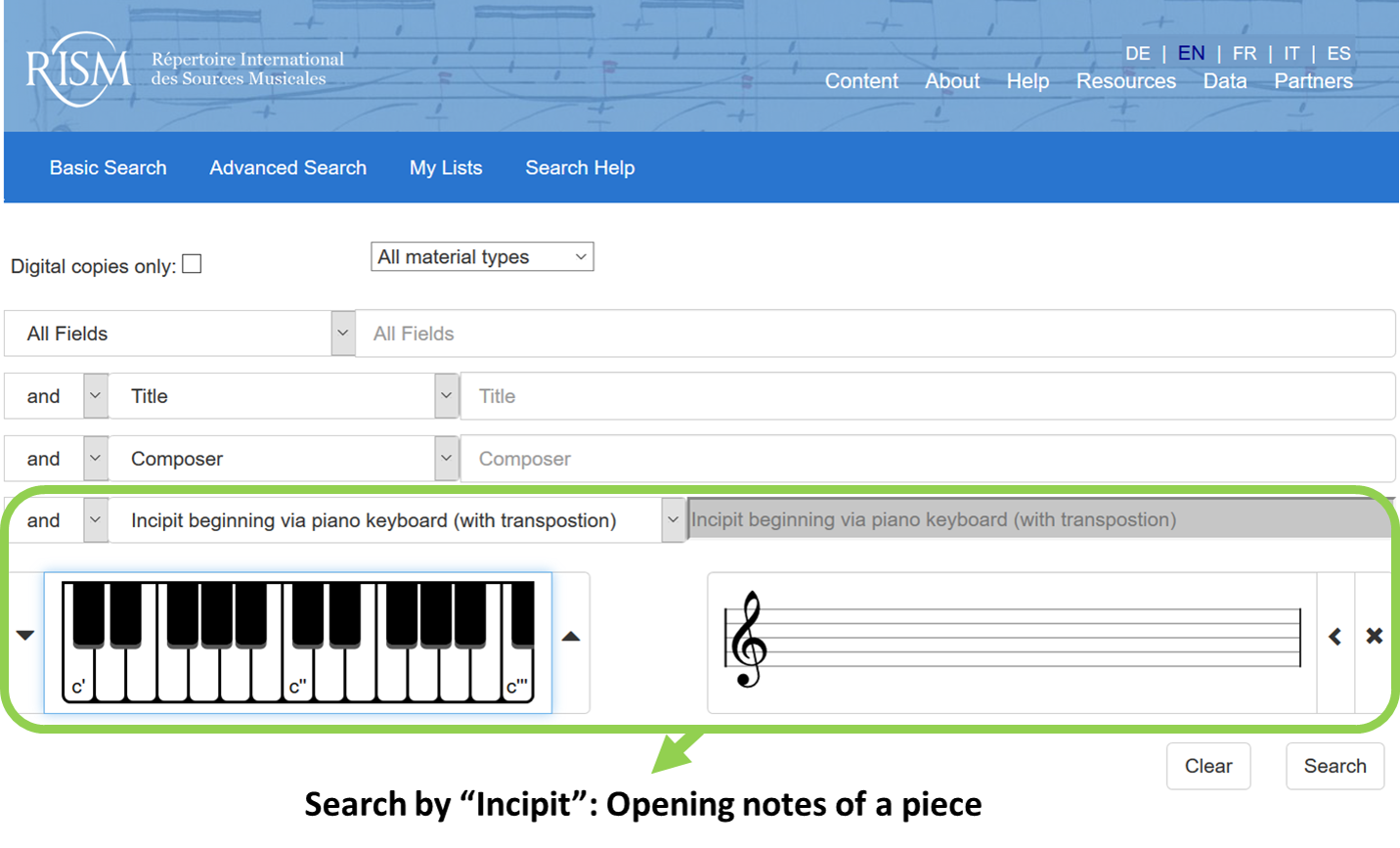 Collected works (or Gesamtausgabe) are of a particular composer, whereas Monumental works (Denkmaler) are collections of music from a particular time, or place.

Our Catalogue lists many individual works in Collected and Monumental editions (as well as in Anthology editions), however, not all catalogue entries include the full works listed. To locate a piece in the collected works of a composer:

Note: Some Collected Editions can also be found online, such as the Neue Mozart-Ausgabe

Or use Heyer's work on Historical sets, collected editions, and monuments of music: A guide to their contents. Find it at Mount Lawley Main Collection Call Number 780.263 HEY. The book includes a list of complete editions of the music of individual composers and the major collections of music that have been published or are in the process of publication.

You can find a free (non-printable) copy online at the Hathi Trust Digital Library: Historical sets, collected editions, and monuments of music: A guide to their contents

Whilst most of our databases are text-based, some of them have downloadable scores, or help you to find sheet music in print by composer, title, part(s), etc.

UCLA Music Library's Archive of Popular American Music is a research collection covering the history of popular music in the United States from 1790 to the present. The collection has 450,000 pieces of sheet music, anthologies, and arrangements for band and orchestra and includes 62,500 recordings on disc, tape, and cylinder.

Check out the page on using Databases in the tabs above.

Works of Mozart (1756–1791) in digital form via the internet for study and performance purposes.

IMSLP Pettrucci Music Library is a free virtual library containing all public domain musical scores, as well as scores from composers who are willing to share their music with the world without charge.

Tools and services that promote access to and use of online sheet music collections by scholars, students, and the general public. An Open Archives Initiative Protocol for Metadata Harvesting.

Scores and books in the public domain, over 21000 items unique to the Sibley Music Library collection.
Musopen is a 501(c)(3) non-profit focused on increasing access to music by creating free resources and educational materials with recordings, sheet music, and textbooks to the public for free, without copyright restrictions.